I have been looking forward to checking out the remodeled Pano’s on Elmwood for a while now and all I can say is that I am so mad at myself for not going sooner! Upon first walking in, the atmosphere gave me some major modern Grecian vibes. The menu is casual Greek with options for everyone, including all-day breakfast.

With an impressive drink menu, I started with a Blood Orange Moscow Mule. It tastes like summer in a glass and had me reminiscing about sipping cocktails overlooking the Mediterranean in Santorini. Except on Elmwood Ave.

I highly recommend the Mezza Plate as an appetizer. It is the perfect trio of hummus, tyro kafteri (feta cheese pepper spread) and melitzanosalata (eggplant dip) served with pita. All three of the spreads were tasty but let me tell you, I will be dreaming about the creamy cheese pepper dip for a long time.

For entrees, I ordered the Moussaka, which is traditional Mediterranean vegetable lasagna. topped with bechamel sauce & panko. It had a surprising spice to it which was evened out by the creamy sauce. I would definitely order again. The Psari Plaki dish is a haddock broiled with tomatoes & olive oil served with sauteed spinach and Greek potatoes. The haddock had a fresh and peppery taste, but the real stand-out was the potatoes. SO. GOOD. 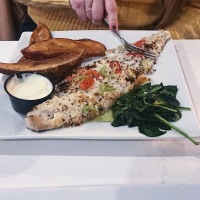 Overall, the experience was enjoyable and the food and atmosphere were fresh and fun. Pano’s also has an awesome brunch menu that I plan on experiencing as soon as possible!

Ok I’m just going to say it… Perks Cafe has the best avocado toast in Buffalo. With goat cheese and sriracha…it’s what my dreams are made of!

The location is very large compared to many cafe’s in the area. I have been here a couple times with my running group (shout out to Studio Sophia!) and there is always plenty of room for all of us. Lots of people socializing or just coming in for a coffee while reading a book.

Along with the avocado toast, we ordered the Southwest Breakfast Burrito with turkey sausage. With pepper jack cheese and sriracha, it definitely has a spicy kick to it!

Perks Cafe has a decent sized coffee and signature drink menu, all using locally roasted coffee beans. On this hot day I ordered the Iced Jamaican Me Crazy coffee which was refreshing with a yummy hint of cinnamon flavor. No cream or sugar necessary!

I need to come back again soon to try out their lunch menu. It looks healthy enough with delicious ingredients. The Cranberry Apple Chicken Salad Wrap is on my radar to try out next.