The infamous pink stairs. We’ve all seen the pictures flooding social media of friends posing on the sparkly steps. I needed to see what it was all about and if the restaurant-arcade lived up to the hype!

The first thing to note – the restaurant does not have a sign out front but you know you are at the right place because of the packed bar, LED lights, and fun neon signs inside! I definitely stood outside awkwardly for a minute before realizing I was in fact in the right place. 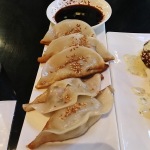 Even though we couldn’t pronounce the majority of the menu items, we wanted to be adventurous and try as many things as possible so we started out with a couple of appetizers. I’m a sucker for rice balls so the Age Onigiri was my favorite. These were deep fried and topped with sesame seeds, pickled plum & shiso mayo. Divine! You also can’t go wrong ordering the Pork Gyoza which are pan fried dumplings served with ponzu soy sauce. 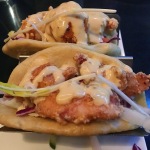 For an entree, I ordered the Chicken Bao Buns which were to die for! The buns practically melted in my mouth and the chicken was fried to a perfect crisp. I would order them again in a heartbeat.

Lastly, the “Dunbari” Kushiyaki Bowl is sort of a choose your own adventure item where you pick your preferred skewered meat and veggies, either with steamed or fried rice. My friend picked the Japanese sweet and sour Meatballs and the Yakitori (Chicken Skewer) and was satisfied with that choice!

All in all, Misuta Chows has a fun, vibrant atmosphere that I would definitely recommend for both the food and experience. I didn’t get the chance to play the arcade games upstairs, but you better believe I got the pink stair pic! I look forward to heading back soon to check out the arcade and sample even more menu items. 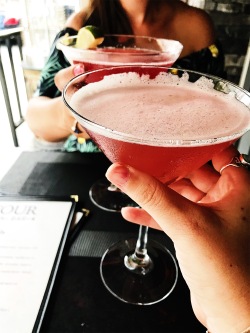 I have been so excited to go to D-Tour Martini Bar since the second I drove past it on Chippewa before it was even open. I FINALLY had the chance to go this summer with one of my girlfriends. This place has the perfect atmosphere for a girls get-together or date night! We went on a gorgeous night where we were able to sit out on the patio for happy hour, which provided free entertainment (people watching) overlooking Chippewa Street.

D-Tour has an awesome weekday happy hour special with 2-for-1 martinis and house wines from 4-7pm, along with some appetizer specials. The martinis are all named after a local Buffalo street which is a fun little detail. I tried the Tupper (Belvedere Vodka / Chambord / Pineapple Juice / Prosecco) and the Gates Circle (Stoli Blueberry Vodka / Chambord / Simple Syrup / Soda Water). Both were delicious and highly recommended.

For food, they have a menu of small plates, salads, and a melt bar with a handful of classic sandwiches. I can vouch for the Margarita Flatbread Pizza and the Roasted Banana Pepper Dip with ricotta & parmesan cheese and marinara sauce. The dip is different from any others in the area because instead of the typical creamy base, it’s more of a red sauce which was a nice change from the usual. So yummy and perfect for soaking up those martinis!

Whether you are looking for a happy hour, a date, or girls night out, I highly recommend checking out D-Tour. I need to make my way through their martini menu, so I’ll make sure to pop in again soon… 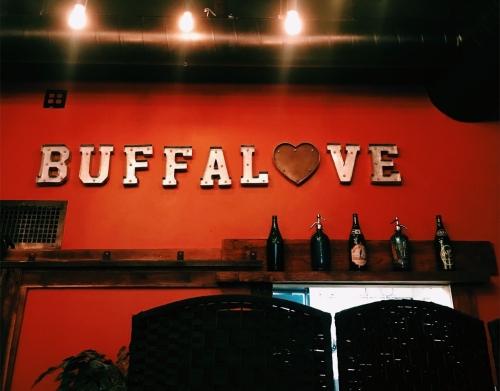 Local is one of my favorite downtown restaurants. In my opinion, Chippewa is getting a new vibe, moving away from the club-only, underage drinking that it used to be. Of course, those clubs still exist but more and more restaurants are popping up making it a more civilized scene for everyone to enjoy! (Did I just make myself sound old?!) Local Kitchen and Beer Bar is definitely one of the game changers.

First, the atmosphere is more chill, with repurposed wood from an old local barn covering the walls and bar. The menu boasts local vendors and 716 inspired dishes. Obviously, with the name of the restaurant, they have a multitude of beer options available on draft which is typically what I go for.

The Beef on Weck Egg Roll appetizer is one of my favorites. Just something so unique and delicious, with a side of horsey sauce that gives it a kick! Other Buffalo staples include their Local Platter with a Beef on Weck Sandwich and 5 wings with french fries, and on Friday’s you can get their Rusty Chain beer battered Fish Fry.

You also can’t go wrong when ordering any of the sandwiches or salads (if healthy is what you are looking for!). If you are gluten-free, they have gluten-free pasta and buns that you can substitute to still enjoy the menu.

Local will continue to be one of my go-to spots downtown and a great place to bring out-of-towners to sample all the local favorite foods. Stop on by and let me know what you ordered!!

Liberty Hound is a really special restaurant because they are one of the very few options right on the water in Buffalo. I recently stopped in for some dinks and appetizers with friends after a beautiful sunny day at Canalside.

We went in the evening knowing there would be a decent wait for a table, so we put our names in and got drinks at the bar first. The have many local beers on draft and about 15 signature drinks. I started with their “Liberty Mule” which was really refreshing after a day in the sun.

For dinner we were seated on the patio and had a beautiful view of both the water and the huge ship at the Naval Museum that is right next to the restaurant. I highly recommend coming here for the view alone. It’s a major plus that the food is delicious too!

My friends and I tried out a couple appetizers: calamari, pepper dip, and the Mediterranean flatbread with hummus, kalamata olives, arugula, and feta cheese. Honestly, the pepper dip wins the award for most delicious. We could not stop raving about how delicious it was; the perfect combination of spicy and cheesy.

Although we only had appetizers during this visit, Liberty Hound does have many sandwich and entrée options that sound very appetizing. I am determined to go back soon to try the entrees out before summer is over, so check back for an updated post soon! I’ll try my best to order more than the binge-worthy pepper dip. 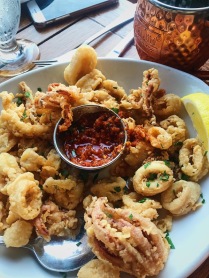 Tappo is one of my favorite restaurants in Buffalo. They have traditional Italian dishes in a really trendy atmosphere. In the summer, you can dine on their rooftop patio that is spacious with plenty of seating, has a lounge area and a full bar.

Another awesome thing about Tappo is that they have $16 bottles of wine and champagne which is very inexpensive and typically unheard of in the city.

Along with a bottle of prosecco, we started with the garlic cheese bread and one of the appetizer specials, which was a stuffed banana pepper topped with a sunny side up egg.

Since I’m a sucker for goat cheese, I ordered the Goat Cheese Crespelle for my entrée which is basically a crepe filled with goat cheese served with banana peppers and both an alfredo and a red sauce. Best of both worlds!

The other entrees ordered were the Shrimp Risotto with roasted cauliflower and lobster beurre blanc, the Meat and Cheese Lasagna (which is huge!), one of the Rigatoni specials, and the meatballs. Everyone was really happy with their choices!

Tappo is located at 338 Ellicott Street. 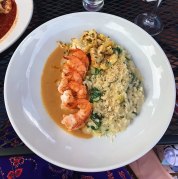 I was excited to go to SATO Brewpub because I have never been to a Japanese restaurant that brews its own beer! I loved the location right away. Fun fact: it’s located in the Dun building which was Buffalo’s first skyscraper.

It’s kind of inconspicuous at first so make sure to look for the red logo on the front door. You walk down a flight of stairs where the restaurant is located in the basement. There were only two of us dining, but there are many large tables so it would be a good place to come with a large group as well.

As a brewery, they have about 6 of their own beers on draft. I tried the “Rabbit in the Moon” which is a table beer based on a traditional Japanese house green tea. It was refreshing and went well with my meal. Next time I want to try their Pear Ginger Saison which they happened to be out of on this day.

Now for the food. SATO Brewpub is an “Izakaya” – a casual Japanese gastropub meant to be a place of socializing over small-plates and beer and sake.

Since an Izakaya is known for small plates, I had to try a couple! I ordered the Ume Chicken Gyoza, Chicken Katsu served with Japanese BBQ sauce, and Steamed Bun with stout braised BBQ pork, cucumber, kimchi. Delicious! Three small plates were the perfect amount for one person. 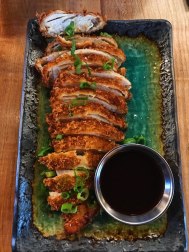 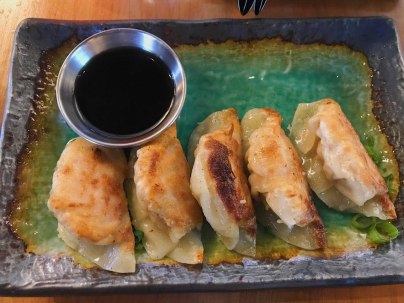 Ok I’m just going to say it… Perks Cafe has the best avocado toast in Buffalo. With goat cheese and sriracha…it’s what my dreams are made of!

The location is very large compared to many cafe’s in the area. I have been here a couple times with my running group (shout out to Studio Sophia!) and there is always plenty of room for all of us. Lots of people socializing or just coming in for a coffee while reading a book.

Along with the avocado toast, we ordered the Southwest Breakfast Burrito with turkey sausage. With pepper jack cheese and sriracha, it definitely has a spicy kick to it!

Perks Cafe has a decent sized coffee and signature drink menu, all using locally roasted coffee beans. On this hot day I ordered the Iced Jamaican Me Crazy coffee which was refreshing with a yummy hint of cinnamon flavor. No cream or sugar necessary!

I need to come back again soon to try out their lunch menu. It looks healthy enough with delicious ingredients. The Cranberry Apple Chicken Salad Wrap is on my radar to try out next.