I have been looking forward to checking out the remodeled Pano’s on Elmwood for a while now and all I can say is that I am so mad at myself for not going sooner! Upon first walking in, the atmosphere gave me some major modern Grecian vibes. The menu is casual Greek with options for everyone, including all-day breakfast.

With an impressive drink menu, I started with a Blood Orange Moscow Mule. It tastes like summer in a glass and had me reminiscing about sipping cocktails overlooking the Mediterranean in Santorini. Except on Elmwood Ave. 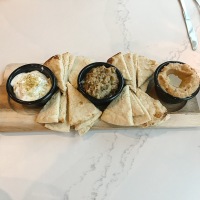 I highly recommend the Mezza Plate as an appetizer. It is the perfect trio of hummus, tyro kafteri (feta cheese pepper spread) and melitzanosalata (eggplant dip) served with pita. All three of the spreads were tasty but let me tell you, I will be dreaming about the creamy cheese pepper dip for a long time. 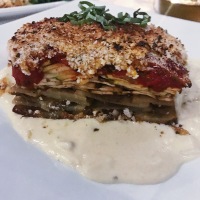 For entrees, I ordered the Moussaka, which is traditional Mediterranean vegetable lasagna. topped with bechamel sauce & panko. It had a surprising spice to it which was evened out by the creamy sauce. I would definitely order again. The Psari Plaki dish is a haddock broiled with tomatoes & olive oil served with sauteed spinach and Greek potatoes. The haddock had a fresh and peppery taste, but the real stand-out was the potatoes. SO. GOOD.

Overall, the experience was enjoyable and the food and atmosphere were fresh and fun. Pano’s also has an awesome brunch menu that I plan on experiencing as soon as possible!